It was a hot day in Naples and after a while, I just do not handle heat well. I’d seen a lot of the city, but I wanted someplace with less people, some place that would be cool, some place with beautiful art. I found it all at the Naples National Archaeological Museum. From stunning statuary, to rescued artwork from Pompeii and Herculaneum, to the “Secret Room” that houses erotic items found in Pompeii, I found this is a “hidden gem”. While is is considered one of the most important archaeological museums in the world, the day I visited, it was nearly empty, so I could stroll at my leisure — something unusual at many European museums. I guess everyone else was at the beach!

Here are some of my favorite pieces from this museum.

At one time, the Secret Room was locked and you had to obtain special permission to see the artwork. Now, it is open and some of the collection is included in a special touring exhibition, such as the show at the Royal Ontario Museum (ROM) in Toronto last year. 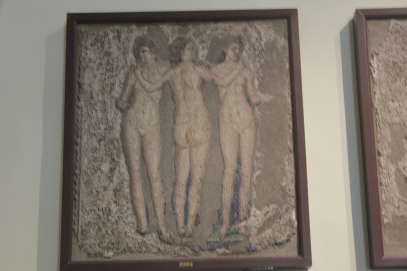 So, if you want something to do after you have eaten Napoli pizza or spent the day a beach, head to this museum. The works of art collected there are some of the best.

3 thoughts on “N is for Naples Naples National Archaeological Museum”