Sailing into the port of Catania, Sicily was interesting because we could get a great view of Mount Etna and really appreciate the size of this volcano. When I was there in May 2017, it was not erupting, but there were some interesting cloud formations. It also seems that Etna truly is the heart of this land, down the very plants that grow on its slopes. 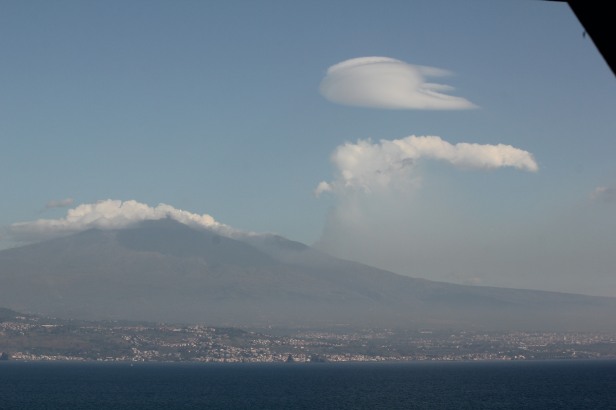 Since I had never been to this part of Sicily before, I joined a small, private tour group – and was very happy with this experience! We were met by our driver and eight of us shared a van. Our driver was from the area and knew a lot about where we were going. He also knew about the current traffic conditions because many roads were blocked or restricted because of preparations for a G7 Summit meeting later in the month. With very few roads in and out of the area we were going, I felt sorry about how much this meeting was going to affect the local population.

Our first stop was a fishing village of Giardini Naxos. This was the first Greek settlement in the area and is celebrated with modern a statue of Nike. It has a beautiful sandy beach and many places to eat and drink along the coastline.

We then headed up the slopes of Mt. Etna and started to see the views from a different perspective, from snow at the top of Mt. Etna, to the coastline of the fishing village. 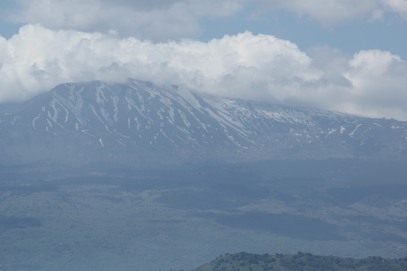 We also got our first look at the town of Taormina and its magnificent Roman amphitheatre. For this part of the journey, we made two stops, one at a chapel that was built in a cave and one at the village of Castelmola. This is a charming village with great views and access to an Arab fortress.

We then headed back down to the town of Taormina – and what a zoo!  Everyone seemed to be converging on this town and there was construction and preparations going on every where for the Summit meeting. There was limited access to visit the Roman amphitheatre, with one of the major streets blocked.   However, I would love to go back and spend more time here, as it has charming streets to walk through and lots of shops and restaurants along with more great views of the coastline. 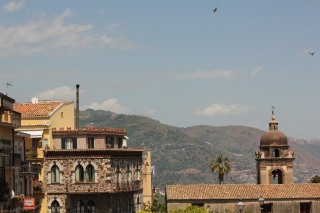 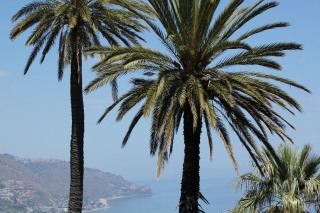 Our next stop was for lunch at a winery on the slopes of Mt. Etna. We visited the Gambino Winery, which is the highest winery on the volcano. We were greeted by a member of family who started our wine-tasting adventure. We had a delightful lunch that included tasting four wines with some typical Sicilian food: dried tomatoes, Etna area mushrooms and olives, local salami, several types of cheese, sausage in white wine, and salad. The views were spectacular and I took some interesting photos on the way (and I should mention that the wine was also quite good and plentiful!).

After lunch, we made our way back to Catania and the ship. It was a very nice day!