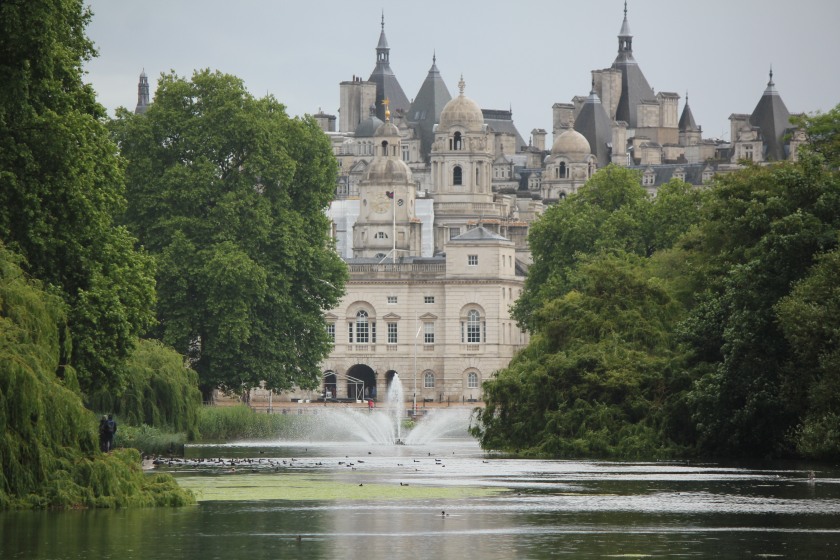 I did not want to rush the day, so we took our time getting up and heading for the continental breakfast served at the hotel. When I told mom we would have to go back to Victoria Station to catch the bus tour, I saw her cringe a bit. I think it was mostly because of how busy the station is. However, we headed out – this time with my camera – to see what we could.

Taking the Big Bus tour blue line, we saw more of Hyde Park, Notting Hill, Kensington and Paddington.  I even saw the B&B I stayed at on my last trip to London. It is near Paddington Station. We then drove by more of the other sites of London – Big Ben, Parliament, The London Eye, etc. I also remembered the photo tips from the day before!

We got off at the London Tower. There were crowds, but not quite as bad as I thought they would be. We headed to the dock to take a boat ride along the Thames to Westminster. The commentary was very funny and it was nice to get a different perspective of city sights.

When we got off the boat, I decided to try something. I told my mom that I had a surprise to show her and it would not be a long walk. We worked our way through the crowds until we got to Westminster Abbey – and yes, she was surprised and happy! It is just behind the Parliament Buildings, so it is not a far walk, but still unexpected. While we looked at the Abbey, I decided to try something else.

Mom wanted to see Buckingham Palace and I wanted to walk through St. James and Green Parks – my favourite parks in London. So, I convinced her that yes, I knew where I was going (“see, here is a sign with an arrow pointing to it!”) and that it wasn’t a long walk and the bus would not take us there. We walked to St. James Park with no issues – and few people to bump into.

Of course, once we got to the park, there were a couple of issues. One, there was some sort of race going on and it started to rain. We just pulled out our umbrellas and started walking down one of the paths. I was surprised at how many people “took shelter” under the large trees, even though we heard thunder.  Doesn’t anyone know what happens when a tree is struck by lightning?

Along our walk, we saw many birds, including pelicans, swans and many ducks. I talked about walking through this park in twilight with mist rising from the ground and magic filling the air. We crossed a bridge and there we saw one of the best pictures you could get of the palace, perfectly framed between the park’s trees.

The park also has clean – and free – toilets! This is always a good thing to know.

We continued our walk through the park and found several nests filled with baby ducks. They were so cute and so fluffy! 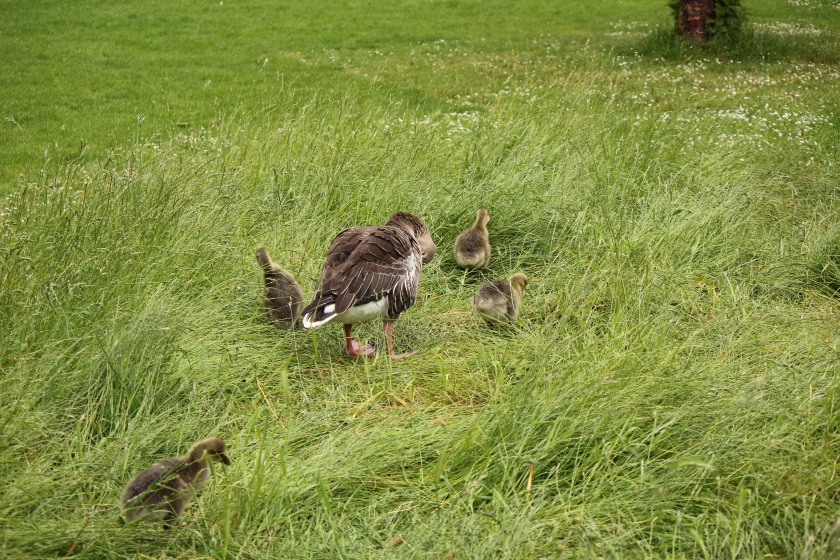 Upon exiting the park, we saw more of the palace and the Victoria monument, but we could not get close because the circle was blocked. This was the finish to the races. We did see the finish of a wheel-chair race where the first place finisher set a record.

I then convinced mom that it was only a ten-minute walk back to her favourite place in London – Victoria Station – where I needed to get some cash and we needed food. I almost had her convinced when a tour bus stopped next to us – and we opted to take it back to the station where I found a bank machine.

About a block from the station is the St. George’s Tavern where we stopped for an early dinner. I loved this place! When I wasn’t sure which beer to order, the bartender gave me a “flight” of six beers to taste – all from specialized breweries. It was interesting to taste the different ones. I finally settled on the stout – it was creamy and delicious. For dinner, we got an appetizer of brie fondue, which had currents mixed into the cheese. Mom got a traditional cottage pie and I opted for a venison and mushroom pie with sloe gin gravy. It was quite tasty!

That pretty much sums up our whirlwind visit to London. So much I wanted to do – not enough time at all.

I have to say that throughout this trip, my mom was a real trouper! Travelling with anyone can be a challenge and I am so used to “going solo” that I really had to focus on what was best for both of us. My main goal was that I wanted this to be very special for her while still seeing some of the things that would be special for me as well.

It must have been a good trip – we even talked about what we could do next!

My personal highs – and a few lows – will be highlighted in upcoming blogs. Also, pictures — many more pictures!