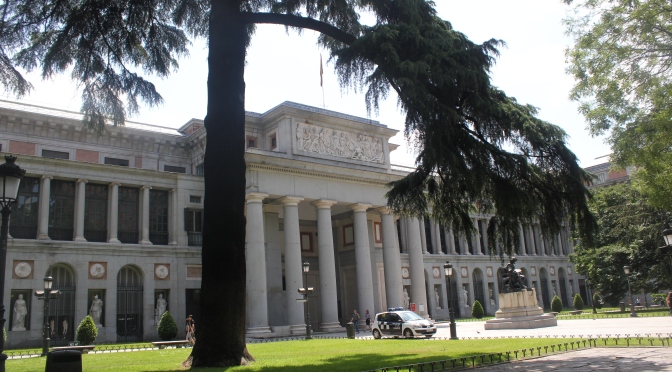 I started my Sunday in Madrid at the Prado Museum.  I wanted to get there early so that I could miss lines and maybe some of the crowds.  Having a Madrid Card helped as I could go directly to the entrance without any lines or hassles!

I also decided not to focus on seeing the “best of the Prado” but just to wander and experience the museum.  Did I miss any of the highlights of this massive museum?  I do not think so — but does it really matter? This was my time to journey and just experience the art my way.  I was moved by Albrecht Durer’s self portrait and r by seeing a copy of the Mona Lisa (one that has been determined to have been done by a student of di Vinci), and then there are the amazing Goyas and Velazquezes etc … I wandered for several hours just drinking it all in.  It took my breath away!

But after being indoors for the morning, it was time to get outside and enjoy the beautiful weather.  I kept my “wandering” mood as I visited the Royal Botanical Gardens, which are next to the museum.

I decided to spend the rest of my day the may many people from Madrid do on a Sunday afternoon — I headed over to Retiro Park.  As soon as I walked in, I found the special garden that was planted to remember the victims of the March 11, 2004 train station bombing. It is called the Bosque del Recuerdo.

Continuing through the park, I had to see the only Plaza in the world dedicated to the Fallen Angel, El Angel Caido. It is also a great place to watch people and skaters.

Then I wandered to the Christel Palace …

And from here .. I just enjoyed the park.  People on the lake, to musicians, puppeteers, psychics … and just people out for a great day.

Sailing into port in Dubrovnik was a little like Kotor – not quite as long, but similar mountains and scenary.  As it should be, since both on are the same coastline overlooking the Adriatic Sea.  As we were coming into port, there was a suspension bridge that looked like we would have to try to go under but there was no way we would have made it!  Just as it looked like we were going to try, the ship turned and we were docked.

Shuttle buses from the ship took about 20 minutes to drive from the port to the Old City gates – most of the time was for port authorities to check travel documents.  Along the drive, I was reminded of streets in Berkeley – that area around the “circle” where I would always get lot at because I could not pick the right street! But, soon, I was at the city walls – and now I was reminded of how Mdna in Malta looked when you first entered the walled city.

The colour of the walls was more like the walls around the old town of Rhodes, but once I crossed the bridge, I discovered that I have never been in a city built of marble like this one. Even the pavement was marble, down to the gutters that helped to drain water (although the only water in the city was the sweat dripping down in the 30+ degree heat (100+ degrees) — very little shade and no breeze unless you were close to the water.  I melted!

When you enter the main gate, you see what is considered the oldest pharmacy – built in 1313. Next to it is a Franciscan Monastery. The main street, or plaka, has a number of tourist shops, stores, gelato, etc. Each cross street lists some of the businesses that can be found there. And there are also a lot of stairs – especially going along the wall (in the heat with no shade). But there are also places to get out into the water (wish I had  known how easy that was …) and you can even rent kayaks. You will also find women crocheting different types of items for sale.

Probably the most confusing was money. I left my Euros on the ship, thinking that I would get some Kronos in town – which I did.  Then, when I tried to buy something, they wanted Euros and actually gave me change in Euros.  Then, trying to just get some gelato and a bottle of water, they wanted Kronos, but all I had now was Euros! Very confusing. There are lost of ATMs in the city, however never where I needed one — when I needed one!

I wandered around the town – found the Dominican monastery (of course) and was going to take the gondola to the top of the mountain – but ran into the money issue again.  Hot, tired and a little frustrated, I found a shady spot to watch kayackers before heading back to the shuttle bus (long line) than back to the ship.

I would love to come back to Dubrovnik – but not at the height of summer!

We were told that the cruise into Kotor was spectacular.  As you may know if you have followed other cruises that I’ve taken, when I hear this, I really can’t miss it.  So, I was literally “up with the sun” and got some great sunrise shots over the mountains that make up the fjord-like canyon that leads from the Adriatic Sea to the Bay of Kotor.

It was an amazing – and very windy – passage.  There were at least three islands that had churches.  One was more of a ruin, however every July 22 the locals row boats out to this island to through rocks at it, supposedly because it is made from stone (which I thought was a lame excuse – I think the locals are trying to through away their bad luck – that makes more sense to me). The scenery was beautiful. We finally come to the end of this passage – right to Kotor.

So, never heard of Kotor? Here is some background. Kotor has been populated by various people since 3500 BC (the Illyrians). Kotor passed through many hands.  The Romans claimed it as Acruvium 2 centuries before Christ.  It was part of the Roman province of Dalmatia and was under Roman rule until the late 5th Century. Germanic Goths came next – then the Venetians who then the Byzantine Empire, then the Islamic Saracens — then the first Bulgarian Empire (who gave the city to Serbia – they did not like that). In the 1400s, Kotor was absorbed into the Venetian Republic built the much of the great wall that surrounds the old town (you know how much I love walled cities!). It changes hands several more time: The Austro-Hungarian Hapsburgs, Napoleonic French, the English, the Austrians, Yugoslavia, Nazi Germany (via Italy) during WWII then it became part of the Socialist Republic of Montenegro within communist Yugoslavia. It is now part of the independent country of Montenegro.

The port is not large enough to dock the ship, so we had to take tenders from the ship to shore. There was a slow start to this process, but I think I was finally on shore about 10 AM. The old city was just across the street from the port and I was able to enter through the main gate (also known as the sea gate).

As you enter, there is a bas relief carved into the wall of the symbol of Venice – the winged lion – more indication of the influence of Venice to Kotor.  The next thing you see is a clock tower, which has been destroyed in several earthquakes, however after the last on in 1979, the clock was fixed and it tells time again (something it did not do for almost 3 centuries). I was able to wind my way around to the next highlight of Kotor: the Cathedral of St. Tryphon. Don’t know who he is? Neither did I, although it appears that he is some sort of martyr – that there are relics from him in the church. It is one of the oldest churches in Europe, dating to the mid-1100s – and built on the foundations of another church – and (surprise) a Pagan Roman Temple. Sounds a bit like the church I visited in Rome – San Clemente – with its foundation built over a Mithraeum. In fact, I think the same could be said for this one – I saw two statues that looked a lot like the torchbearers I saw that the Mithraic Temple. Cool thing about visiting this church, it is an easy climb up to the twin towers and the portico between them!

I then wandered through the streets, visiting the Town Fountain (where at one time all the fresh water used by the town came from), the Church of St. Luke (built in the late 1100s) and the Church of Saint Nicola (a Serb-Orthodox church from the 1500s).

I did not climb the city walls or make my way up the hillside to the Fortress of St. John. Why? It was raining for most of this walk and some the wall is not very safe to walk.  I did find the Scorpio patio restaurant and got a nice espresso, though. I also wandered the streets and found some other churches, including this very small one.

I decided the just eat a late lunch on the ship and take a nap – my early morning was catching up with me!

The rain did stop – and so I got more pictures.

Europe .. in isolation I dream

Just cruisin' around the world

Travelling around Europe -- London, Norway and the NetherlandsJuly 15th, 2020
Looking forward to sailing with my sister!